If you dont know who the bear is I am not going to tell you... but if you do ROFLMAO

Employee Rights Short Takes: Age Discrimination Cases In The News : Employee Rights Post: "The lower court granted judgment in favor of the college holding that the college did not violate the New Jersey Law Against Discrimination because the statute allows an employer to refuse to renew an employment contract of an employee over seventy years of age. The Court of Appeals reversed and the the New Jersey Supreme Court affirmed in an opinion issued on June 1st holding that refusing to renew contracts for employees over the age of 70 because of their age violates the New Jersey’s age discrimination laws. 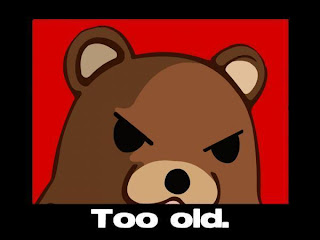 In other words, the failure to renew a contract because of age is equivalent to a termination -- not a failure to hire --according to the New Jersey Supreme Court. This case is good news for the many employees who are employed with contracts that are renewed year to year, or at the end of a certain term, particularly in states with statutory exceptions in discrimination laws similar to New Jersey’s."