Meet Tom Gordon, Jr. He’s a TSA agent who enjoyed patting down little kids at airports has now been suspended as a TSA officer. Why? He was busted uploading child pornography to his Facebook account. Mind you, I have been lectured by TSA agents that they are highly trained and are smart, just like this guy pictured below who makes a whopping salary comparable to two burger flippers at McDonald’s. 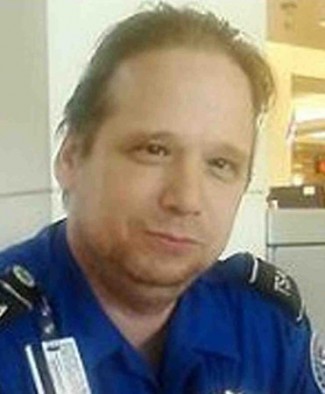 Yep, Ol’ Gropey McForehead above who can’t even find deodorant or a razor in his own medicine cabinet, much less with an XRay machine of your luggage, is authorized to touch your kid at an airport. But not anymore. From Philly.com here:

A passenger screener at Philadelphia International Airport is facing charges that he distributed more than 100 images of child pornography via Facebook.

Thomas Gordon Jr. of Philadelphia, who routinely searched airline passengers, uploaded explicit pictures of young girls to an Internet site on which he also posted a photograph of himself in his TSA uniform.

Homeland Security agents arrested the TSA officer March 24, and he is being held without bail.

Citing privacy rules, TSA spokeswoman Ann Davis would not say if Gordon has been suspended from his job, but noted that he had been in federal custody since his arrest.

“We can assure the public that he is no longer working at the airport,” Davis said.

Authorities also seized from Gordon an HP laptop and a four-gigabyte flash drive that they say contained more than 600 images or movies containing child pornography, according to court filings.

The TSA can’t even screen their own employees and they are in charge of screening US?? And this guy is clearly stupid, and a slob to boot.